The Train Festival is held every year in various locations, much like the olympics. A town is chosen to host the festival and people come from all over the world to view and interact with steam engines and other trains.

This year Train Festival 2009 was held in Owosso Michigan, which is just a few minutes from Durand, where you will find a large train presence even to this day. The festival on its own wouldn’t be a reason to drive 17 hours each way, but we did. However the draw was the Morning Daylight 4449 which only makes an appearance every 4-5 years. This time it was brought out for the festival for fans to enjoy.

My family and I took an all day excursion on the Morning Daylight from Owosso to Alma and back. During the run photographers (such as myself) were offered the opportunity to photograph a train drive-by in the small town of Ithaca. Basically the train backed up and drove at about 30 mph, allowing us to capture a rare and amazing sight. There was no time to set up a proper shot, instead we all stood on the ballast (rocks that hold the tracks in place) and took photos.

The photo seen here was my favorite of the bunch where I got about 10 feet from the train and before the ground began to shake snapped a photo and then retreated to safety. 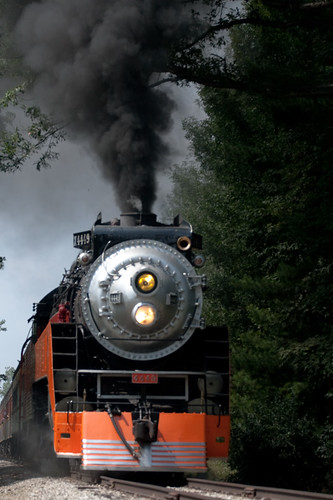 You can view the other Train Festival 2009 photos on my flickr photo stream.

Overall the festival was a great time. There was many steam engines, models, collectibles and train enthusiasts from around the world. I am sure we wouldn’t have gone if the Morning Daylight 4449 didn’t make an appearance, but I am glad we did and could see myself going back next year.