Tethering a 30D in Aperture 2

Tethering a 30D in Aperture 2

After recently upgrading to Aperture version 2.0 I was informed that the Canon 30D was one of the various cameras not supported by Apple at this time. At first I got mad, cursed at the computer and then started of possible alternatives. I could run out and buy a new camera but I figured I may want to look at much less drastic options.

Bibble 4
The first 3rd party alternative I tried was Bibble 4. This application was rated very high in the photography industry and overall works well. However, I did notice the interface was clunky and the price tag was about 3/4 the cost of Aperture.. not really something I wanted to spend.

That being said, Bibble does have tethering options, but not in the sense I was after. Bibble is setup to monitor a folder, and import those images, but you have to mess with the camera controls directly on the camera.

DSLR Remote Pro
This was the second application I looked into, but was unable to give it a test-drive due to the Windows-only support. I am sure it is a good application, but I am not able to comment personally. Maybe in the future I will install it, but back to the issue at hand.

EOS Capture
Canon ships a CD of cool applications with a new camera, but just like everyone else, I lost the disk. I figured, no problem, I will just head over to canon.com and download the software. Well, that would be the ideal solution, but Canon only offers updates on their site. Rather than spend more money to get a CD I called up a friend and temporarily borrowed his CD, long enough to install the capture application.

With it all installed I hooked up my camera to the MacBook Pro and was certainly naive to think it would all just work. After some searching I found Canon had posted a new firmware for the 30D so I downloaded and installed that.

Once again I attached the camera to the computer and finally I was able to control the cameras settings and shutter remotely from my computer. 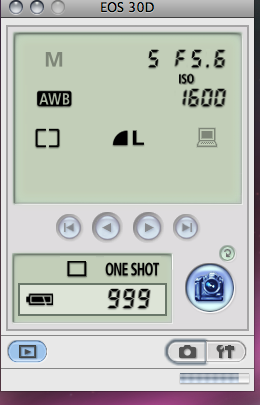 This was at least a good start to solving my ultimate problem, which was of course the ability to “tether” my 30D for Aperture 2. Once the capture software was working properly I assigned a specific directory in my Pictures/ folder where all captured photos would be stored.

Getting the photos into Aperture
The trick here is forgetting that Aperture can even tether on its own because it doesn’t work for my camera. That being said, I created a new project in Aperture and assumed I could add a watcher on my directory I created within the capture software. Well once again, Aperture amazes me with its lack of support for the simplest things.

Automating the import process
With the help of an Automator script I was able to assign a watcher to the directory that I picked in the capture application. This script monitors that folder and sends new files to be imported into Aperture which ultimately end up in my project.

Working as one
As you can see, following these simple steps I have achieved the tether-like ability in Aperture 2. Now I would prefer an official solution from Apple, but for now this works quite well. 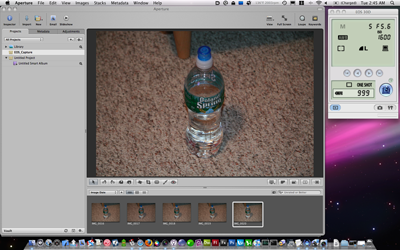 You can find some still life samples on flickr which were shot using this setup.

Of course you can adapt this guide to any other DSLR camera as long as it has a capture utility that works.